Skip to content
Learn more about our free weekly virtual event to support your inner work!

In the mid-15th century, one incredible woman resisted the gendered constraints of her time and achieved what seemed impossible. At 16-years old, Joan of Arc led the French army to victory against the English, fulfilling what she believed to be a divine mission. Despite her feat, society was not prepared for a woman like Joan of Arc. She was tried and convicted as a witch and heretic, and burned at the stake at the age of 19. Delve into Joan of Arc’s story in order to draw inspiration for your own developing life path.

Joan of Arc’s story has emboldened generations of people, beginning after her unjust death in 1431 to the present day. Her legacy unites people of disparate belief systems, where she sits as both a Catholic Saint and a feminist icon. Her story begs us to challenge our conceptions of the status quo and the impossible.

Herstory of Joan of Arc

Joan of Arc was born a peasant girl in Domrémy, a small village in northeastern France, in 1412. She did not learn to read or write, but with the aid of her pious mother, developed a deep love for the Catholic faith. At the time, the French were losing the Hundred Year’s War against the English. Charles of Valois, the French heir to the throne, remained throne-less. In his place sat King Henry V, serving as both the ruler of England and France and leaving northeastern France, where Joan lived, under English control.

By the age of 13, Joan of Arc began to see and hear the divine voices of St. Michael, St. Catherine of Alexandria, and St. Margaret of Antioch.

In these visions, Joan was told that it was her calling to aid the French in defeating the English and restoring the throne to its rightful holder, Charles.

The Maid of Orléans

Three years later, Joan left her small village to fulfill her divine mission. It goes without saying that in the middle ages, it was far from uncommon for an illiterate young peasant girl to request a meeting with the heir to the French throne, nonetheless to give him unsolicited battle advice. Nonetheless, Joan embarked on her journey and in preparation for the 11-day trip to the crown prince’s palace, cut her hair and dressed in men’s clothes.

As a test, Charles disguised himself amongst his courtiers. Without hesitation, Joan found him and told him to entrust her with leading his army in battle in order to secure his crown. To this day, historians do not know exactly what Joan of Arc said to convince Charles that she was sent from God to make him King. Despite Joan having zero military experience, and against the advice of most of his generals and counselors, Charles agreed.

Adorned in men’s garb and white armor on a white horse, Joan of Arc led a triumphant battle, forcing the English (and their northern French Burgundian allies) to retreat, restoring the throne to Charles.

The Downfall of Joan of Arc

Following her miraculous leadership and victory against the English, Joan of Arc became known across Europe as a leader and continued to influence French military tactics. The following year, however, in an attempt to protect the town of Compiégne which was under attack, Joan was captured by the Burgundians and brought to the castle of Bouvreuil, which was occupied by the English.

Intimidated by her intelligence, courage, and power as a young woman, the Anglo-Burgundians put Joan of Arc on trial in a church court for heresy, witchcraft, and dressing as a man, among 67 other charges.

Labeling Joan of Arc a witch would help to discredit the new French King, Charles, who owed his throne to her accomplishments. Her claims to have communicated directly with God also threatened the church’s hierarchy and embarrassed those high up in the church, who could not accept that a peasant girl would be chosen by God over themselves.

Despite Joan’s loyal victory and gift to Charles, the King distanced himself from Joan. Left without any help from Charles, Joan rested in jail for over a year, before being publicly burnt at the stake on May 30, 1431, at the age of 19. 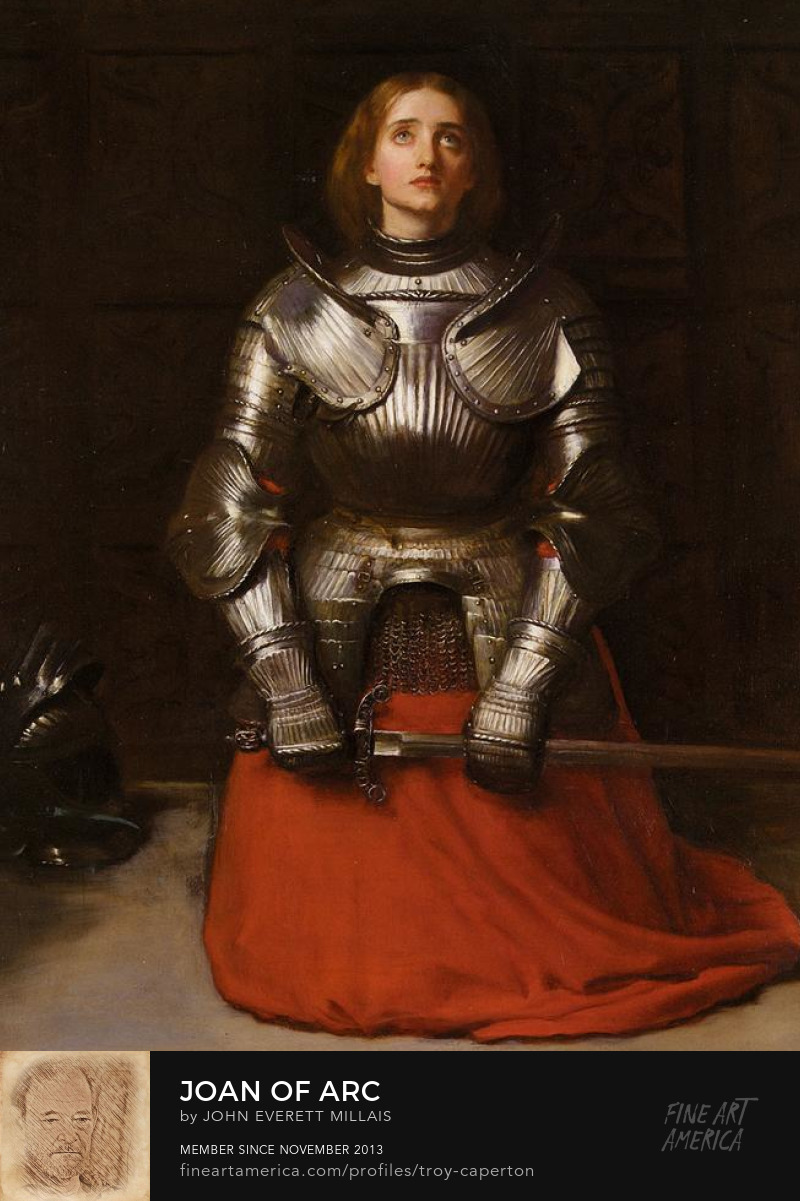 After death, Joan of Arc began to receive her due praise and celebration. Twenty years after she was burnt at the stake, another trial ordered by King Charles VII cleared her name. She swiftly attained legendary standing, becoming a patron saint of France and inspiring works of literature and art for centuries to come. In 1930, Pope Benedict XV canonized her, officially declaring her a saint.

The world and the status quo were not ready to integrate the intentional life and powerful path of Joan of Arc in the middle ages. The question now begs whether they are today. The exoneration of Joan of Arc, like many other martyrs, can only satisfy her memory. No one can undo the terror of being burnt at the stake for being a heroine.

Joan of Arc was driven by a deep connection to divinity, but her perseverance and courage do not solely need to be understood in a religious context.

Fueled by a deep connection to her inner purpose, Joan was able to surpass every expectation of her womanhood, age, and class standing, to accomplish her life’s work. Her journey reminds us of the truth we too often forget: that we, as women, and as people, are capable of far, far more than we could ever have imagined. It is up to all of us to harness our inner strength to overcome the societal expectations that hold us back from realizing our true potential, connecting to our purpose in life, and accomplishing whatever it is we seek to achieve.

Map Your Own Hero or Heroine’s Journey

Stay tuned for a deep dive into your own personal heroine or hero’s journey using Joan of Arc as a guide. How can we, as women, use Joan of Arc’s story to reclaim parts of ourselves that we have lost or stifled? Map out your own hero or heroine’s journey here.

Share Follow Tweet Share View
Posted in Creative Purpose
← Winter Solstice Reflection: A Year in ReviewThe Hero’s Journey: Seeking Guidance on Your Quest →
×
Scroll To Top
We use cookies to ensure that we give you the best experience on our website. If you continue to use this site we will assume that you are happy with it.Ok